The Church of England is set to offer special services to welcome transgender people to the Anglican faith after its ruling body backed a motion seen as a symbol of acceptance of an often marginalised community.

The General Synod, meeting in York, voted in favour of the move by 284 votes to 78. It was the second time in two days that it gave overwhelming support to motions seen as positive towards LGBT people, suggesting to some a significant change of mood. 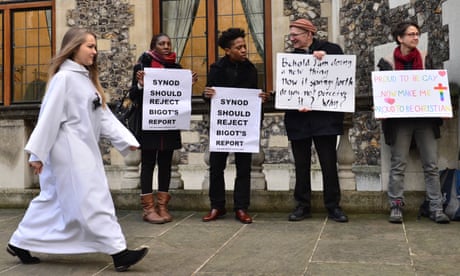 The motion said transgender people should be “welcomed and affirmed in their parish church”, and that bishops consider whether special liturgies “might be prepared to mark a person’s gender transition”.

Proposing the motion, Chris Newlands, from Blackburn, Lancashire, said: “I hope that we can make a powerful statement to say that we believe that trans people are cherished and loved by God, who created them, and is present through all the twists and turns of their lives.”

He told the synod of the son of two members of a big evangelical church, who he called Nathan. At the age of five, after medical advice, Nathan became Natalie, and returned to school “much happier … and with very little fuss from staff, pupils and parents”.

Not all members of the church were as supportive, however, with some offering only “grudging acceptance”. Newlands said he hoped the debate at synod “will help to inform that church, and many other churches, of the challenges children with gender dysphoria face”.

Citing data from the Tavistock and Portman NHS Foundation Trust, he said that in 2010, 97 children in the UK were referred to gender identity clinics, but by 2016 the number had risen to 1,400.

He said: “Across the world, trans people have been subjected to appalling violence against them. In the UK, transphobic hate crime has risen by 170% in the last year.”

According to figures from the LGBT campaign group Stonewall, 48% of trans people under the age of 26 said they had attempted suicide.

Some speakers in the debate drew attention to the symbolic message that passing the motion would send. “It’s about opening our arms to the trans community, a community that so often feels excluded,” said Lucy Gorman, from York.

Bishop of Worcester John Inge said: “Our response needs to be loving and open and welcoming and the passing of this motion would be a very important factor in that.”

A background paper to the motion urged bishops to consider providing “liturgical materials which may be used in parish churches and chaplaincies to provide a pastoral response to the need of transgender people to be affirmed following their long, distressing and often complex process of transition”.

It acknowledged that clergy could not be required to perform such a service if they “cannot in good conscience offer support in a liturgical marking of a person’s transition”.

Some Christian traditionalists say gender – male or female – is assigned by God and cannot be changed. Such a view was not expressed in the 75-minute debate, which was overwhelmingly supportive of a positive pastoral response to the transgender community and those undergoing the process of transition.

Sunday’s vote came less than 24 hours after the synod decisively backed a motion condemning conversion therapy as unethical and potentially harmful, and calling on the government to ban it.

After hearing two of its members describe their experiences as spiritual abuse, the synod agreed that the practice had “no place in the modern world”.

Conversion therapy is usually described as an attempt to change a person’s sexual orientation or gender identity. Some churches in the C of E and other denominations have encouraged LGBT members to take part in prayer sessions and other activities to rid them of their “sin”.

Jayne Ozanne – who underwent conversion therapy resulting in two breakdowns and two spells of hospitalisation – said the practice was “abuse from which vulnerable adults need protecting”.

But some synod members expressed concern that the motion would limit the church’s ability to offer pastoral care and prayer for people struggling with issues of sexual desire and orientation.

Some saw the vote as a sign of a greater acceptance by the church’s ruling body of LGBT people.

David Ison, dean of St Paul’s Cathedral, said the absence of major opposition showed that “the mood in synod overall is shifting somewhat towards acceptance and realisation of the damage that has been caused” to LGBT people.

However, on the divisive issue of same-sex marriage, the synod was told that a working group to review the church’s teaching on marriage would not report back until 2020 at the earliest. Some synod members accused the bishops of stalling.