“Tennis is a part of me. It’s made me more independent, it’s given me a focus and a way to express myself. I feel like tennis saved my life.”

Zach Brookes is a 22-year-old tennis player and coach with a passion for his sport and a story to tell. Since first picking up a racket at the age of seven, tennis has helped Zach through tougher times, and now provides him with a platform to push himself, and also help others. He spoke to Sky Sports about his experiences of being transgender in sport, his work with Stonewall’s Trans Advisory Group and his positive outlook for the future.

Before I came out as trans in my sport, when I was 18, I was really struggling. I nearly quit tennis. Whenever I would go to a lesson, I struggled mentally and physically in my play. My coach at the time knew that there was something different. I didn’t feel like playing in women’s tennis. Whenever I looked at other lads queueing outside, I was jealous because I wanted to play with them. I didn’t feel I was in the right category – I preferred playing tennis with the males. I just wanted to be me. 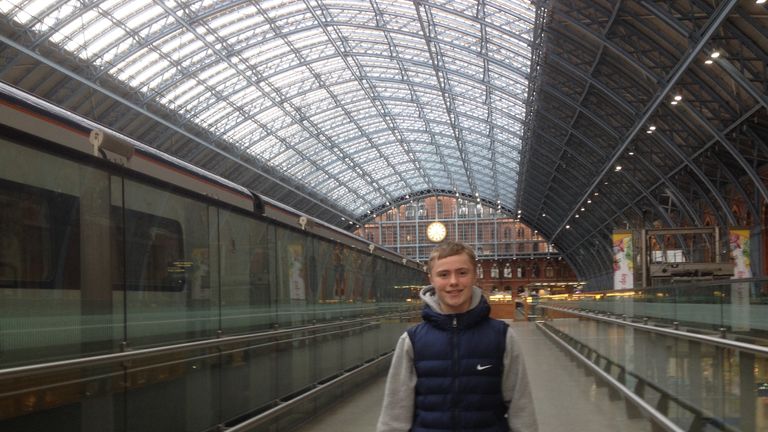 Getting involved in sport at any level is something that can change your life massively if you’re trans.

I found it hard to express my feelings. My mum wrote a letter on my behalf, and my performance coach from the Tennis Foundation responded amazingly. I never expected it to be so positive. She wanted me to have a few months off – I was in a development squad at the time – and to focus on getting used to my gender. I was quiet and I had low self-esteem. My mum said, ‘tennis is part of your life. If you gave it up, what would you achieve in the long run?’ That’s how my mum and other people encouraged me to keep playing.

I’d changed my name, so I needed to speak to the Lawn Tennis Association (LTA) too. They have a ratings system for competitions so that had to be updated. I wasn’t on testosterone (T) at that time, but it gave me something to aim for. Now I’ve been on T for nearly two years. Since then, I’ve never wanted to give up tennis. It’s turned my life around. It gives me the motivation to get on, instead of being preoccupied about my transition. It’s made me more independent too.

I take part in competitions and tournaments organised by the LTA and the Tennis Foundation. I’m also coaching now – my specialisation is in disability tennis. It’s challenging and rewarding at the same time.

In the 1970s, a trans woman called Renee Richards fought hard to get her voice across to the tennis authorities in America to let her play as a female. I’m trying to follow her legacy – she inspires me to become one of the next generation of transgender tennis players. I did some research on her before I came out as trans, on how she empowered other trans people to participate in sport. Since I started playing as a male in tennis, it’s been difficult but I want to keep improving and whenever you have an off day, it makes you stronger.

I’m really grateful to be part of Stonewall’s Trans Advisory Group. Whenever I have an issue with regards to my sport, or I need support with something, they’re always there for me. The Group came together to make our own opinions heard, and encourage other trans people to be heard too. We’re not the ‘trans Wikipedia’ – we want others in the trans community to have their input. We’ve put together a ‘Vision for Change’ plan. Hopefully, it will open doors and will make organisations understand more about what it means to be transgender.

In sport, we should have more training on trans issues for coaches, competition organisers and those in charge. At the moment, there’s a lack of support. If someone comes out as trans, they might not know who to go to. All sports clubs should be able to access training on how to help someone who’s coming out in sport. It will increase awareness and change perceptions. Also, having more trans-inclusive groups will help people develop friendships, and get out more. There’s a high percentage of trans people who are isolated for various reasons.

Transgender athletes should be allowed to compete abroad as who they are. It shouldn’t be about paperwork and having a load of boxes to tick. Some trans people are being made to wait years, and you have to put in a lot of intense work to even get to international level.

We need more gender neutral changing areas. They’ve had problems with ‘bathroom bills’ in America and it’s resulted in transphobic abuse against trans people. When I was at college, due to safeguarding, I wasn’t allowed to use the male changing rooms. One of the PE teachers told me to use the female changing rooms. I refused – I used the disabled room instead.

I’ve had one incident since I came out as trans, when I was competing at a regional tournament, where some of the parents accused me of doping. They had a lack of knowledge about being transgender. Some think we’re cheaters because we have to inject hormones. But hormones are for my life – they need to understand, this isn’t a doping thing. The Tennis Foundation know about my situation though. That’s one reason why there’s a lack of trans people taking part in sport – they’re worried about being labelled a cheat. We need to be respected, instead of being put on the defensive for things we can’t control.

The last time I spoke about my story to the media, the paper screwed it up and I wasn’t impressed. I tried contacting them about the article but they never responded to my email. The headline wasn’t right, and other journalists copied the quotes and used them without telling me. Some people in the media haven’t had proper training on how to write stories about the trans community. They end up making us intimidated and feeling more vulnerable in society. I like using YouTube – in the trans community, it’s a great way of letting others know they’re not alone.

Rainbow Laces hasn’t reached tennis much. Being trans has been unknown in the sport really, at least since Renee Richards. But the more we talk about it, the more people will be interested. It would be great to see a Rainbow Laces day at Wimbledon – Martina Navratilova was so successful there. Roberto Bautista Agut has worn them, but we need to have more sport allies.

I just try to have a really positive outlook, to help me become a stronger person. I know what I w ant to achieve in tennis, but just getting involved in sport at any level is something that can change your life massively if you’re trans – even though you might not be good to start with. Playing can give you motivation and prevents you being preoccupied with other stuff. It’s not just about improving your physical and mental wellbeing – sport gives you insight into working with a team, and the confidence to go on and get a career in later life.

Zach has been nominated for the Positive Role Model Award at the National Diversity Awards 2017. To endorse Zach, click here.