The male victim of horrendous domestic abuse has come forward to show his scars, telling men: “Being attacked by a woman is nothing to be ashamed of.”

Ken Gregory, 65, suffered first and second degree burns to 14 per cent of his body last March after his now ex-wife Teresa Gilbertson, 60, tipped a kettle of boiling water over the back of his head.

Mr Gregory, a former BT manager from Peterborough, met Gilbertson seven years ago following the death of his first wife of 30 years.

On the anniversary of her death, Mr Gregory intended to visit her grave but he and Gilbertson argued, eventually agreeing to divorce.

It was then that Gilbertson, who is now awaiting sentencing for a conviction of serious bodily harm, went to make a cup of tea but instead returned with a jug of boiling water – which she poured over her husband’s head.

“It was unbearable, searing pain. I’d never known anything like it,” Mr Gregory told the BBC.

“I had never imagined something like this would happen to me,” he added.

The attack was the culmination in weeks of verbal abuse, Mr Gregory said. Earlier he had gone to hospital after his then-wife poured scalding tea over him as he slept.

“As a man who is a bit older and who isn’t exactly small, there is a perception that you can’t be a victim of domestic violence,” he said.

Mr Gregory wants to address the stigma surrounding men who are abused by their wives and partners. He added, “it should be the same message that they put out for women – don’t be frightened, you don’t have to put up with it.” 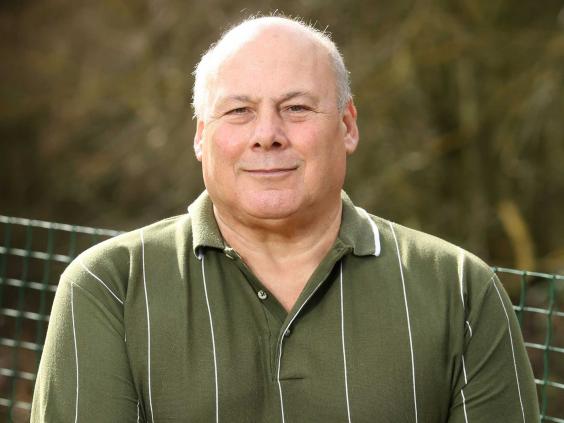 Mr Gregory, pictured earlier this month, is speaking out for other male domestic abuse victims

Statistics, produced by the ManKind Initiative which campaigns for male abuse victims, show that 38 per cent of domestic abuse victims are male.

“There are still too many barriers that men face in feeling comfortable in coming forward and getting help,” he added.

Male victims are also almost twice as likely as female victims not to tell anyone about their attacks. Only 10 per cent of male victims will come forward to police or a health professional. There are only 11 organisations, with a total of 58 spaces, in the entire UK that offer provision for male victims of violence, ManKind also claim.

“Exact numbers of men affected by domestic abuse are not known but more men are coming forward every year to disclose their experiences and ask for help. Public perceptions about men as victims of domestic violence are changing slowly but there is more recognition than ever that it’s not only women who suffer.”